Everything but the Kitchen Sink: Milestones in Kitchen History 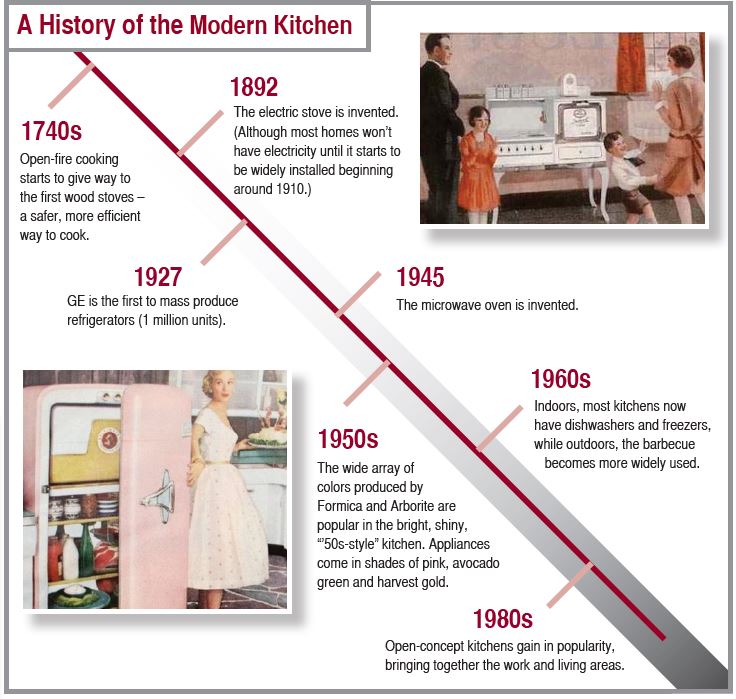 From daily meals with the family to dinner party guests gathering around the granite-topped island, the kitchen holds a unique place at the center of the home. That wasn’t always the case, however.

Merriam-Webster traces the words “kitchen” and “cook” back to the Latin coquere, meaning “to cook.” And it’s that connection of the space itself with the people using it that makes a well-appointed kitchen such a pleasure: The cook can actively prepare a meal while enjoying the company of family members and guests.

Once the late 19th century paved the way with the introduction of indoor plumbing and electricity — and appliances became affordable, reliable and sized to fit in modest homes — the kitchen was destined to become the heart of the household. But it took a host of inventions and advances in engineering and technology to make the kitchen what it is today.

The very engineering used to perfect today’s stone-fired pizzas appeared in the cooking repertoire of ancient civilizations that used outdoor wood-fired stone and brick ovens to bake bread, according to Smithsonian Magazine.

By the end of the 18th century, cast iron stoves allowed cooks to do much more: Regulate temperature, heat several pots at once and — for those with homes large enough to fit the immense structures — warm up the living quarters. In England, gas was used in cooking as far back as 1802, but gas stoves weren’t commercially available until the mid-1830s and weren’t used widely until decades later.

Early models of the electric stove included Canadian inventor Thomas Ahearn’s 1892 version, which found its way into the history books (and Smithsonian Magazine) as part of an all-electric cooking demonstration at Ottawa’s Windsor Hotel.

Refrigeration Comes on the Scene

The 20th century brought a series of inventions that emphasized, and dramatically improved, convenience in the kitchen. A 2010 New York Times article on kitchen design credits the multitasking Hoosier cabinet as the predecessor to the modern kitchen. Invented in the 1910s, it held a hidden enamel countertop, built-in sifters and spice racks, an attached food mill and storage space for pots and pans. For the first time, cooks could prepare a meal in a single space.

Among Plumbing & Mechanical‘s list of greatest inventions are Kohler’s 1926 electric sink — a massive iron and enamel appliance that combined the conventional kitchen sink with an early version of the electric dishwasher. That same period marked the invention of the household refrigerator, which History Magazine hails as one of our greatest unsung inventions, as it freed families from dependency on the ice wagon’s delivery.

Massachusetts-based Raytheon Manufacturing filed a patent for the microwave oven in 1945 and brought it to market two years later. According to The Boston Globe, the initial product weighed 750 lbs. and sold for $5,000 (primarily to restaurants). It took several decades — and significant reductions in size and price — before consumers would fully embrace it.

Making the Most of Your Space Today

Turning the descendants of these remarkable advances into your ideal kitchen is one of the most rewarding investments a homeowner can make. Whether you’re building your dream kitchen from the flooring up or just putting a fresh face on a space you already love, Custom Contracting will help make sure your kitchen reaches its potential as the heart of your home.